Gateway with multiple VLAN IPs on one NIC [closed]

I would like to separate several hosts from the local network and put them behind a firewall. I would like to use VLANs to "physically" separate them instead of using just different subnets. My idea is to use a switch that supports VLANs, and build up the network like this: 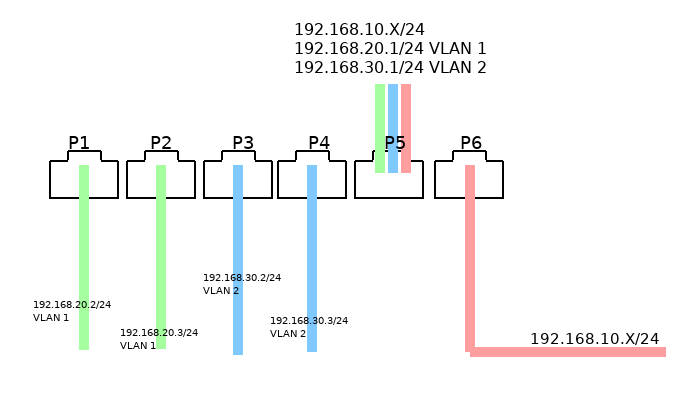 P1 and P2, P3 and P4 are four different hosts that belong to two separate, "physical" networks (VLAN 1 and 2). They should be protected by firewall/gateway on P5.

P6 is the uplink to the existing network.

My questions now are:

Can this idea work as expected ?

Yes, but only if your firewall supports 802.1q vlan tagging.

Not the answer you're looking for? Browse other questions tagged vlan ethernet firewall gateway or ask your own question.

3
Juniper SRX One VLAN Across Multiple reth Interfaces without Intra-zone Policy
8
Access Multiple VLANs from One Computer
4
Multiple VLANs under one subnet (for traffic control)
2
Breaking a stack switches (with SVIs as gateway) - using HSRP
1
Need help with setting vlans(is it possible?)
2
Does each VLAN need a dedicated uplink port?
0
Is "gateway" a concept between two or more networks or a concept belonging to just one network?
2
How are packets handled and prioritized over a link with multiple VLANS?
2
problems routing WAN with private IPs and LAN with public IPs
0
Configuring a network for 100% isolation (for security)