I can SSH from putty

I can SSH from the sever where nessus is installed

I can also SSH into the devices from other devices such as routers.

I have checked and nessus will do a Credentialed scan against other ssh devices, (RHEL 7)

Any idea why this is not working?

The user I am using is setup as level 15

I created a user that can only log in via key, same thing.

I have followed the Nessus article 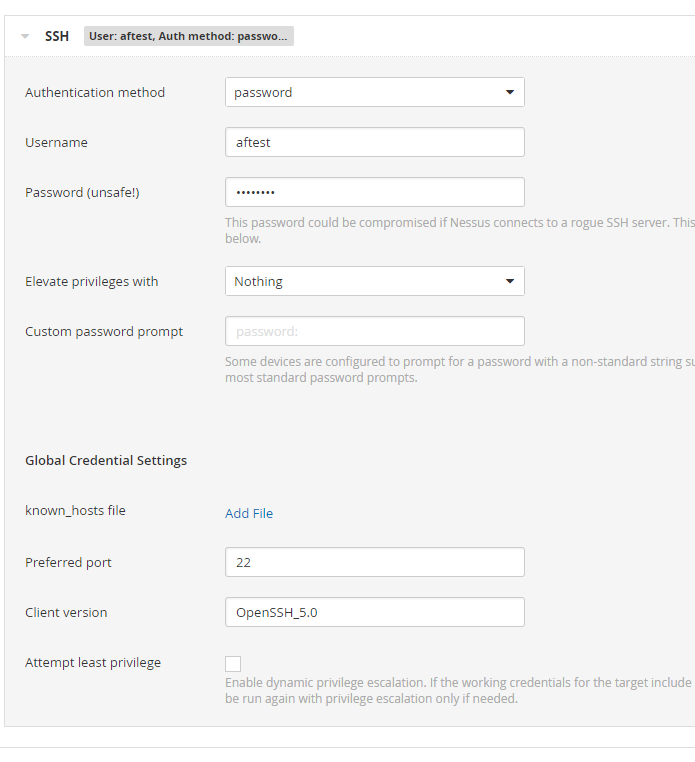 On the left is the output of the logs from the switch, when I ssh in from the server running nessus I can see that ssh connections was accepted

However, when I started the scan, no logs at all. No login attempts

Not sure if any other logs might be helpful

Wireshark info, not sure what is important, however looking at the scan I can see that Nessus is trying to do something on port 22

There may have been a failure in protocol negotiation or communication that prevented authentication from being attempted or all of the provided credentials for the authentication protocol may have been invalid. A protocol failure may indicate a compatibility issue with the protocol configuration. A protocol failure due to an environmental issue such as resource or congestion issues may also prevent valid credentials from being identified. See plugin output for error details.

In a normal SSH connection, the client would initate the key exchange after #64. I'd say the Nessus software is at fault for failing to do that in time. It may be due to the switch generally missing the first ACK but that mustn't be a problem for a client.

1
How to add ssh kex algorithms to cisco sg350