How could far hop's RTT be smaller than a near hop's RTT in traceroute output? [duplicate]

...the round trip time (RTT) for your packet to reach that point and return to your computer.

And in the example, it shows: 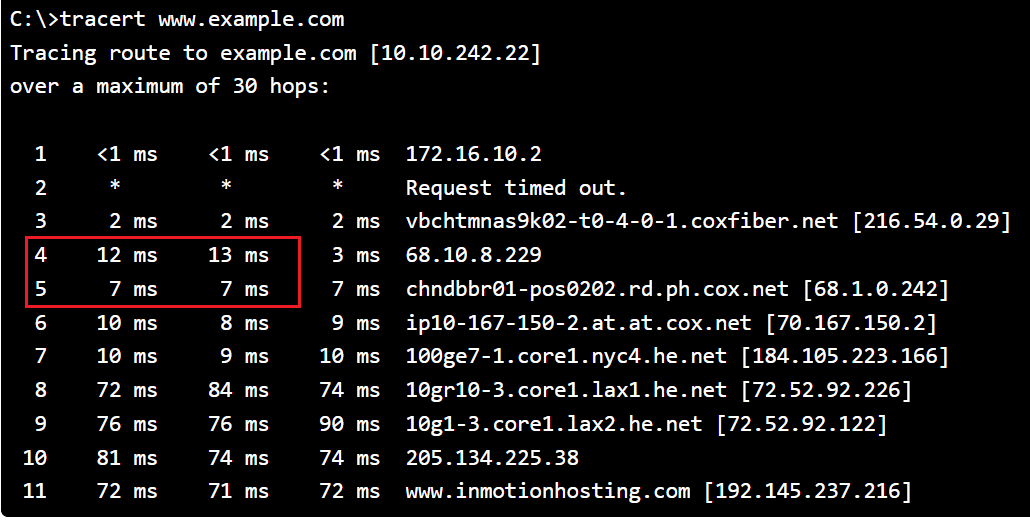 The RTT for hop 5 is smaller than hop 4.

(Thanks to Ron Mauphin's answer.)

I think my previous illustration of how traceroute works is wrong. It should be like this:

The lines are dashed because they are not necessarily direct traffic. There can be routers in the middle. Traceroute only cares about the source and destination of each line. 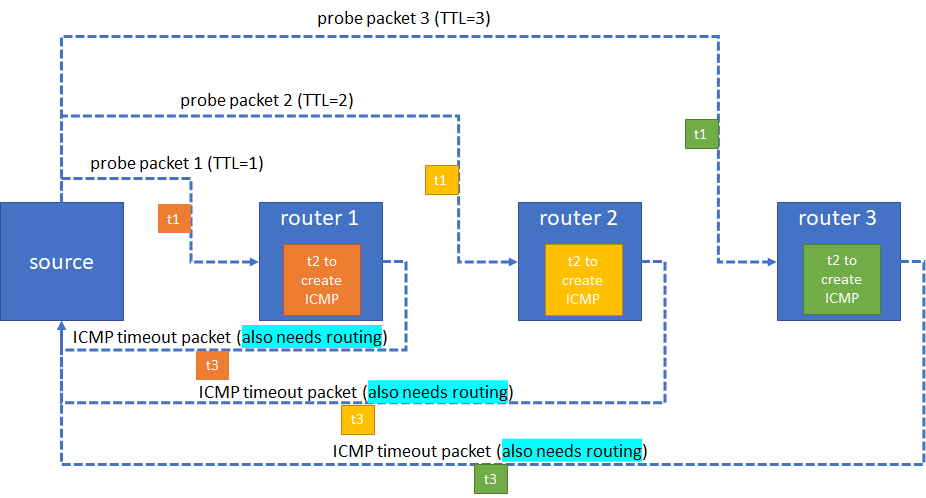 Traceroute is a smart tool that leverages the TTL and ICMP timeout error message sent by a router when a packet's TTL reaches 0. The effective result is to roughly obtain the path through which a source reaches the destination and the RTT to each of the nodes in the middle. It is rough because there's no guarantee that the nodes show by the traceroute is really/strictly one after another. It is possible that each probe packet sent by the traceroute goes through a completely different path which doesn't include all the previous middle nodes probed before.

Strictly speaking, traceroute essentially probes with a increasing distance (the TTL, i.e. max allowed hop number). It sends out 3 packets but even these 3 packets cannot be guaranteed to follow the same path. It doesn't at all measure the latency. It merely says 2 things:

But still, it is useful.

A related thread: Explanation of traceroute

It is because the slower router is busy routing packets (its primary job), and creating ICMP message is a low priority, so it takes its time to generate the ICMP reply.

Traceroute repeats that, incrementing the packet TTL and getting ICMP replies. It often happens that routers are busy routing, and it can take longer to generate the reply that subsequent routers.

Remember that routers can be configured to not send the ICMP message. Tracweroute is really only a useful tool on your own network where you know how things should be routed.

Not the answer you're looking for? Browse other questions tagged traceroute route or ask your own question.

18
Why do some common traceroute implementations default to using UDP probes?
10
How to trace outgoing interfaces?
21
Difference between unresponsive (*) and unreachable (!H) hosts in traceroute output
6
Tips on analyzing traceroute readings
2
Trace Route RTO in one hop but next hop works
0
traceroute and ping behaviour through cisco router
0
Traceroute command last hop cannot be reached
1
Trace internal equipement from Internet while answering
0
How is traceroute Time to Live decremented?