How to configure a router as a dhcp server for vlans through a Layer 3 switch?

I would like to know what commands to type in the different switches and the router to to make the router function as a dhcp server for each PC in seperate vlans . I know to create the dhcp pools in the router and I would like to use the layer 3 switch for inter-vlan routing. 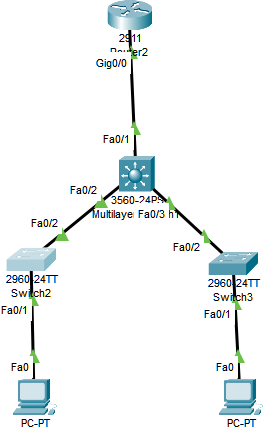 Simply configure a DCHP relay on the SVIs with the ip helper-address <dhcp server address> command.

Alternatively, you can configure the DHCP server on the layer-3 switch.

The built-in DHCP servers are pretty lame. For a real network, you should use a real DHCP server.

A DHCP relay agent is any host that forwards DHCP packets between clients and servers. Relay agents are used to forward requests and replies between clients and servers when they are not on the same physical subnet. Relay agent forwarding is distinct from the normal forwarding of an IP router, where IP datagrams are switched between networks somewhat transparently. By contrast, relay agents receive DHCP messages and then generate a new DHCP message to send out on another interface. The relay agent sets the gateway address (giaddr field of the DHCP packet) and, if configured, adds the relay agent information option (option82) in the packet and forwards it to the DHCP server. The reply from the server is forwarded back to the client after removing option 82.

•If you have multiple servers, you can configure one helper address for each server.

Not the answer you're looking for? Browse other questions tagged cisco dhcp packet-tracer or ask your own question.