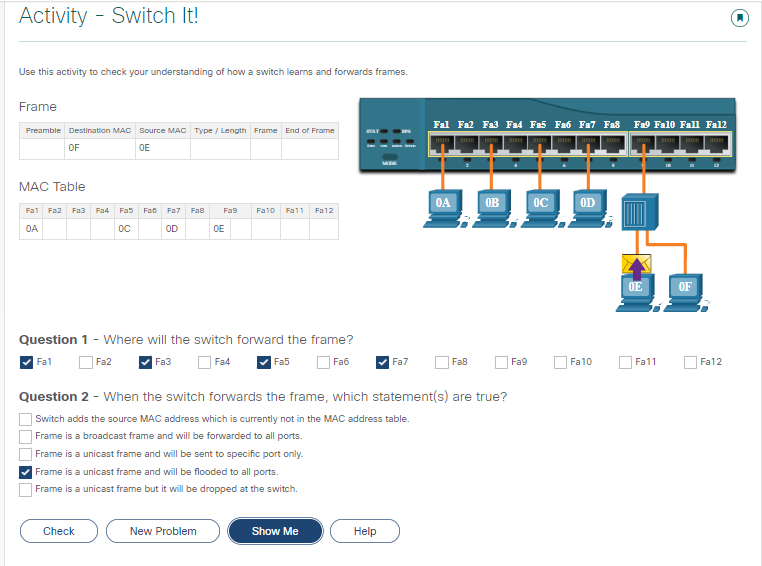 My apologies if this is not the right forum to ask this, but I am a newbie when it comes to networking. I am currently going through the CISCO Networking Essentials course, and one of the Activities in the second module left me confused. Basically computers with MAC addresses 0E and 0F are both connected to a hub, which connects to a single Layer 2 switch port (Fa9). The question starts with the assumption that a MAC address table entry already exists for 0E (Fa9) but none yet for 0F. If computer with MAC 0E were to address a frame to computer with MAC 0F, how would that ever reach its destination? As I understand it, the switch, not "seeing" 0F in its table would flood the frame out all connected ports except Fa9 (incoming), but that means the frame will never exit via Fa9, so how is computer with MAC 0F ever supposed to receive the frame?

Thanks in advance for your help.

A hub simply repeats electric signals received on a one interface out of all other interfaces. So device 0F, as well as the switch, will receive the frame. In that case the switch will not forward the frame out the same port it received it on, but it doesn't matter since 0F already received it. Regarding learning of 0F - The switch will eventually learn 0F's address once 0F sends a frame.

3
question about switches and frame and forwarding table
13
How does a switch know where to route packet, when there is another switch in front of the destination?
2
MAC Address Table for multiple NICs
5
Does a switch MAC address table sync across all switches in the same VLAN?
3
Do typical Ethernet switches have timeout for MAC table entries?
2
Exact trunk operations over an incoming tagged frame
2
How does the switch learn the mac addresses when it's connected to a router?
4
How does Ethernet Switch ensures the validity of the MAC address table?
2
How does ARP work on multilayer (Cisco) switches
4
Why would a switch ever send an ARP request for a MAC address when it can just wait for the first packet to be received from a device?