How to create a subnet or secondary network? Do I need VLANs?

I am not new to IT, but in the past, I've always had a Network Admin to handle this type of stuff. That being said I know just enough to be dangerous.

What I have is an old hodgepodge of different technologies that were all purchased before my time and thrown in together with a wish and a prayer. Now I'm trying to make sense of it all and make it better for our users and myself.

I'm not sure what information you will need to assist me but I'll provide as much as I am able, if I've missed something that would help in figuring this out let me know and I'll update the question.

They all have 1 SSID, it is on the same network as the UniFi APs and should be as they are mirroring one of the 2 SSIDs that are working.

This matches the other 6 from Extreme it was purchased more recently and was cheaper than the new version of the WiNG Wireless APs.

This has 3 SSIDs, and they all work. 1 business, 1 manager, and 1 guest are all separate networks controlled by the AP itself.

These are all connected to various switches throughout the plant.

We are running out of IPs very quickly and I would like to alleviate the stress by creating a separate subnet or network or VLAN (or something) for different things like printers and cameras.

It seems like it should be simple enough, but I can't afford to break our network.

Sorry I was not clear in the original question. I want to know how to create a subnet. I have used a subnet calculator that made it seem like I can create any number of subnets, but I don't know how to actually create them or where.

So my questions are: 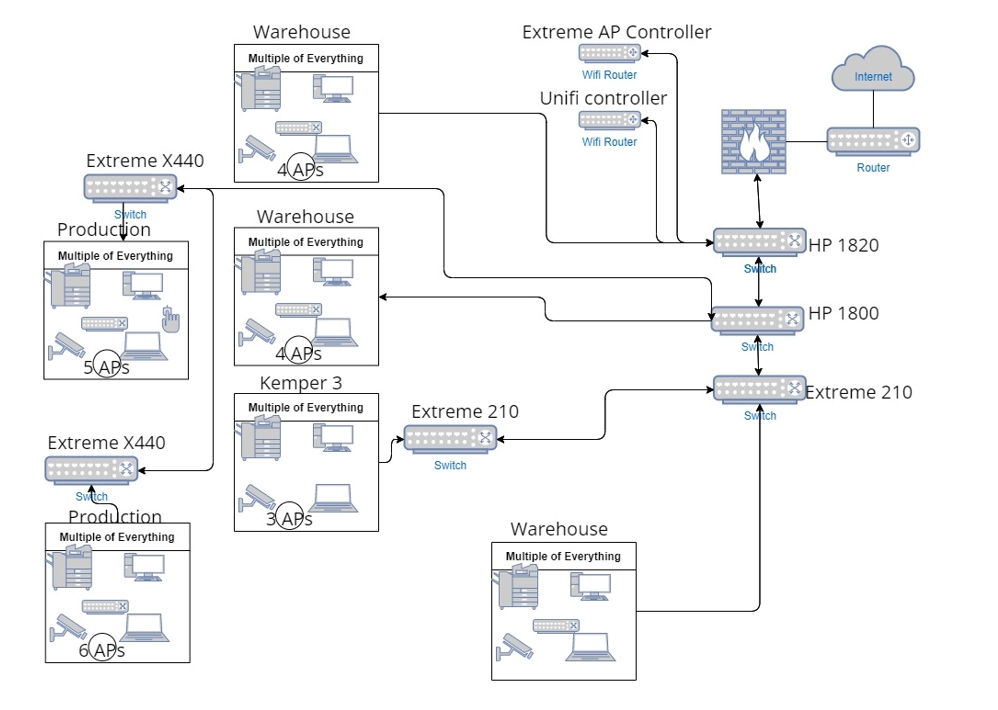 Hopefully, this helps. I am trying to show how much stuff is jumbled together. There are a bunch of different things connected to each switch, laptops, desktops, printers, AP, Cameras, unmanaged switches, some lab equipment too. I just put this together now because we don't have one otherwise.

Is this enough detail?

If you could explain how to set up the first one for the printers I can then go off of that to create the others.

We have just one network. We have 4 types of AP from 3 different brands.

The SSIDs WMS and Management are on the same network they are just different names, there isn't really a reason for this other than it was like that when I got here and I've not fixed it yet.

The SSID Guest uses Aruba's built-in client management system in the virtual controller to grant a separate IP range. It appears to be using 10.0.10.1-254 as its built-in range.

The SSIDs WMS and Management again there isn't really a good reason for these to be separate since the only difference is the name of the SSID.

The firewall we have is a FortiGate 60F. This is managed by our parent company in another country.

As has been pointed out in the comments, that's quite a "grown" network with little structure. However, unless you're out of switch ports you don't seem to need additional hardware.

How and where do I create the subnet?

An IP subnet is actually created by any node using one of its addresses. However, for communication and DHCP to work, you'd need to set up VLANs to match the IP subnets.

Also, you need to connect a router to each subnet/VLAN - either the Fortigate or an X440G2. VLANs need to be set up on each participating switch and all switches in between. Between each pair of switches/routers you configure a VLAN trunk - you tag each VLAN that runs across (one of the VLANs may remain untagged but configurations on both sides need to match). That way, a single physical link can carry all your VLANs.

Each router/L3 switch needs to be made aware of any IP subnets/VLANs that aren't connected to them directly. You can add static routes for that (your network isn't really large) or configure a routing protocol like OSPF with all routers, if supported.

That making aware includes your parent company's upstream router (I'm assuming there's some VPN set up for mutual access). Check with them whether that's OK, how to do it and clear your IP address plan with them! Without VPN, you're likely free to choose any address scheme.

How do I ensure that the subnets can communicate so that when I move printers to it we can still print?

Clients have a printer configured either by IP address or by DNS name. A DNS name points to the actual IP address, allowing you to change a single record to make all clients find a relocated printer. However, we cannot help you with setting that up as device configurations and protocols above the transport layer are off-topic here.

Unless you're fine with limiting all devices to those switches to 100 Mbit/s, you can't really use those.

All in all, you should make up your mind whether you're up to the task. You should understand the basic concepts of IP subnetting, routing, switching and VLANs. Study the manuals, learn about the differences between your devices, and we can probably help you making them work together.

To start with, you could create a VLAN on two adjacent switches, add it to their interconnecting ports as tagged (creating a trunk), add a previously unused port as untagged on each and connect two clients to the untagged ports - they should be able to 'see' each other. Note that you need to manually configure static IP addresses absent a DHCP server.

Using the same method (tagged VLAN over interconnect), expand the VLAN to the router. Configure an IP, a simple ruleset to permit talking to other subnets. Set the router IP as default gateway on the clients. Voilá - you've started virtualizing your network!

Not the answer you're looking for? Browse other questions tagged vlan network subnet or ask your own question.

5
Trying to configure HP Procurve VLANs to segment Unifi guest traffic to another network
1
Need Help Configuring VLANs on SMC Managed Switch
1
Configure VLANs on Juniper SRX - cannot figure it out
1
How can I create a static route between subnets on sonicwall
3
Need help/advice on basic network setup involving security cameras, guest access, and VLANs
2
Restructuring office network advice and How to go about VLAN setup?