For Cisco Hardware dCEF, based on some documents published on Cisco website, at the ingress line card/interface, conceptually it looks up the FIB with dst IP address, and gets a pointer to an adjacency table entry, where L2 rewrite information is stored, e.g. nexthop mac, etc.

But what confuses me is, doesn't the L2 rewrite happen on egress line card/interface?

Conceptually, you can break the information flow into a control-plane and data plane, even within the router chassis. It seems that most of your confusion revolves around how the control plane works... this is a quick diagram I hacked up to illustrate... 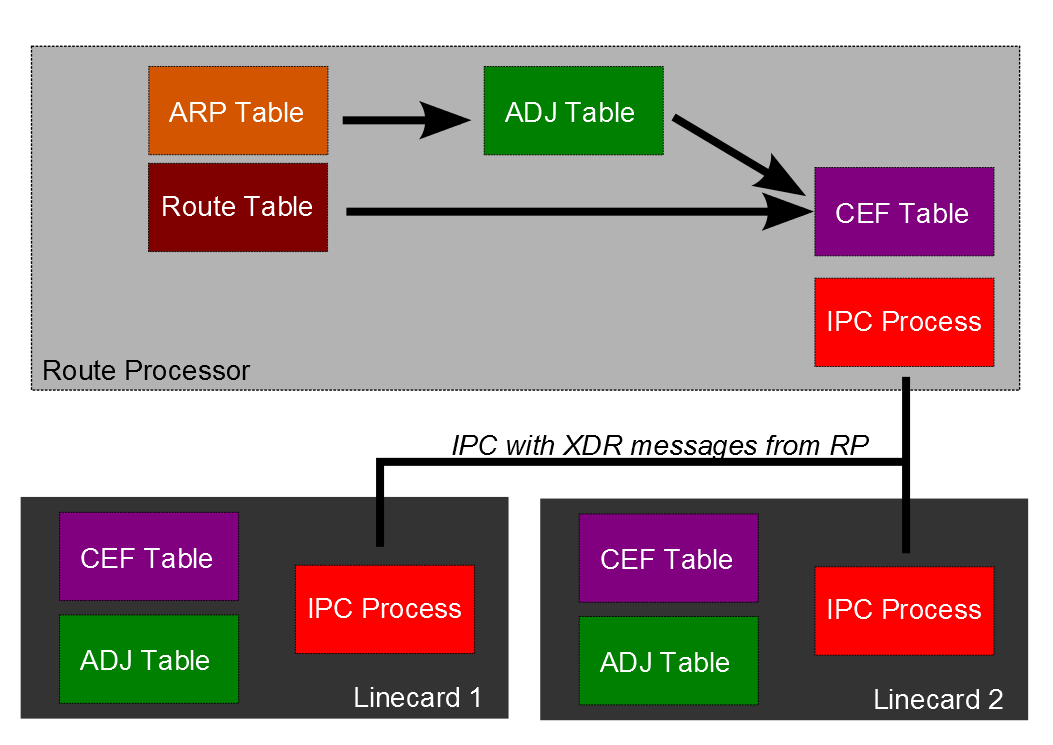 Synchronized IPC is pretty critical to dCEF's operation; if you don't keep messages synchronized between all linecards, you can wind up with prefix inconsistencies.

The mechanics of how the router does this is platform-specific, so I'll reference the platform I know best which is Catalyst 6500 with Supervisor720 / Supervisor2T. The forwarding & rewrite engine on a Catalyst 6500 dCEF linecard is actually a miniature copy of the Supervisor itself; so the whole IP forwarding and switching process executes just like it does as if the packet was centrally forwarded on the supervisor. The ingress dCEF linecard looks up the required information in the CAM / CEF table, and then builds a header which it attaches to the packet.

The egress linecard looks at the header and uses the adjacency information inside it to write the packet onto the wire.

Why this adjacency table is stored on ingress?

So you can make the entire forwarding decision on ingress.

If this is on ingress, are the L2 rewrite information carried over from ingress card to egress line card?

Wouldn't that be a waste of fabric bandwidth?

I don't think so, but then again I could be biased :-)

When distributed Cisco Express Forwarding is enabled, line cards, such as the VIP line cards or the Cisco 12000 Series Internet Router line cards, maintain an identical copy of the FIB and adjacency tables. The line cards perform express forwarding between port adapters, thus relieving the RP of involvement in the switching operation. distributed Cisco Express Forwarding uses an interprocess communication (IPC) mechanism to ensure synchronization of FIB tables and adjacency tables on the RP and line cards. -- Cisco

The RP (running various routing protocol processes) builds the FIB and publishes it to all linecards. There's one FIB, but it's replicated on every linecard. (yes, sometimes they get out of sync.)

Not the answer you're looking for? Browse other questions tagged cisco cef or ask your own question.