I'm in the process of over-hauling our network, the issue I keep coming back to is: trying to bring layer 3 to the core, while still having a centralised firewall.

The main issue I have here is that the "mini core" switches I've been looking at always have low in-hardware ACL limits, which even at our current size we could quickly hit. I'm currently about to (hopefully) purchase a pair of EX4300-32Fs for the core, but I've looked at other models, and other options from Juniper and Brocade's ICX range. They all seem to have the same low ACL limits.

This makes perfect sense as the core switches need to be able to maintain the wire-speed routing, so don't want to sacrifice too much through ACL processing. So I can't do all my firewalling on the core switches themselves.

However, we do mostly fully managed servers, and having a centralised (stateful) firewall helps a lot with that management - as we can't have customers talking directly to each other. I'd like to keep it that way if we can, but I feel as though most ISP networks would not do this kind of thing, hence why in most cases it would be straight-forward to do the routing in the core.

For reference, here is the topology I would ideally like to do (but not sure where to fit the FW obviously). 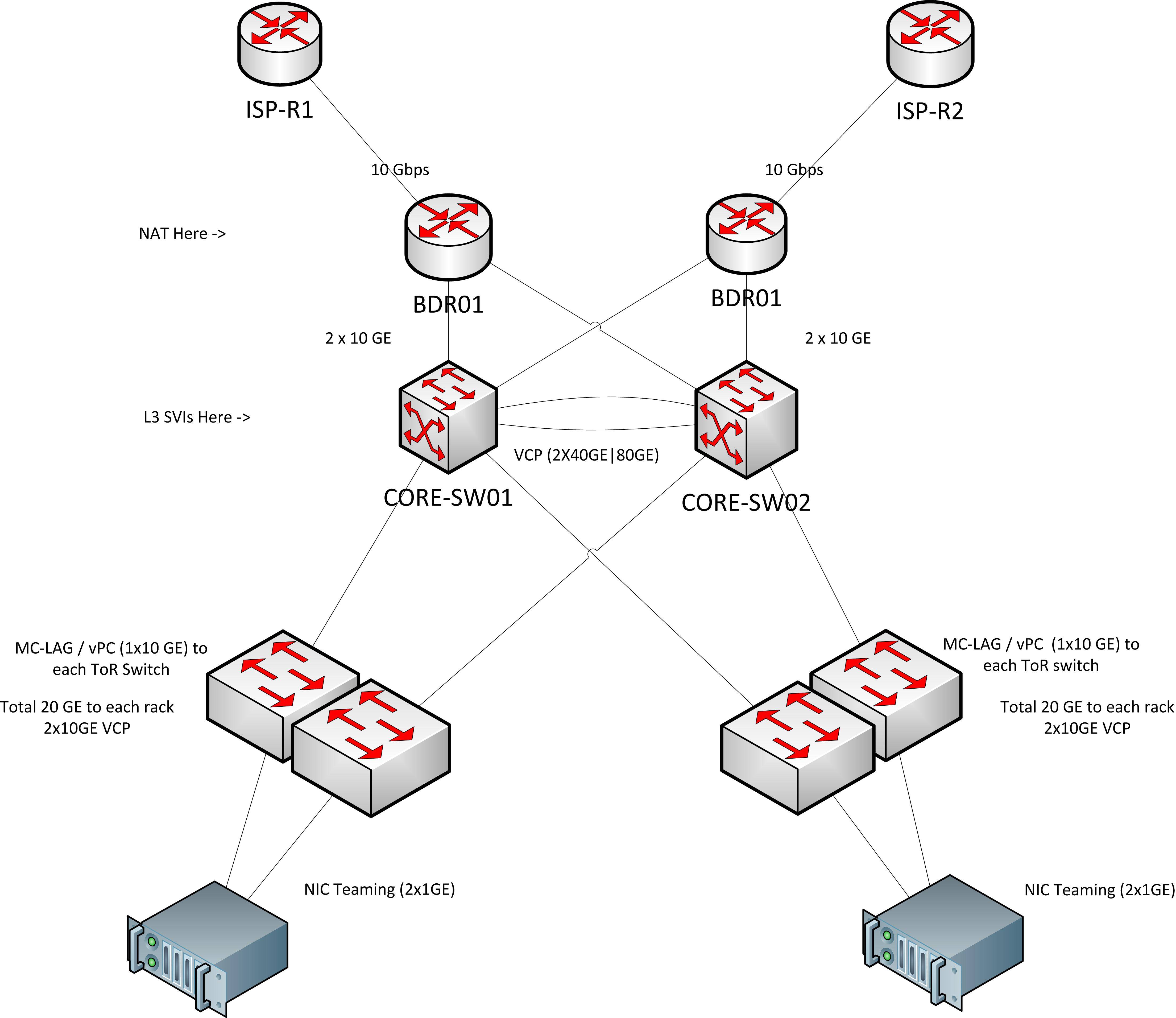 Right now, we have a router-on-a-stick configuration. This enables us to do NAT, stateful firewalling and VLAN routing all in the one spot. Very simple.

I could continue on with (roughly) the same solution by extending L2 all the way to the "top" of our network - the border routers. But then I lose all the benefits of the wire-speed routing that the core can offer me.

IIRC the core switches can do 464 Gbps of routing while my border routers will be able to offer maybe 10 or 20 Gbps if I'm lucky. This isn't technically a problem right now, but more an issue of growth. I feel as though if we don't design the architecture to leverage core routing capacity now, it's going to be painful to redo everything when we're larger and need to leverage that capacity. I'd rather get it right the first time.

I thought that perhaps I could extend L3 to the access switches, and thus break up the firewall rules into smaller segments that would then fit on the hardware limits of the access switch ACLs. But:

This would have to involve multiple firewall boxes, and significantly increase the required hardware. And could end up more expensive than buying larger core routers, even using plain old Linux boxes as firewalls.

Could buy a larger device that can do the firewalling I need and has a much larger routing capacity. But really don't have the budget for it, and if I'm trying to make a device do something it's not designed for, I'll probably have to go to a much higher spec. than I would otherwise.

Since I'm jumping through hoops, maybe this isn't worth the effort. It's always been a nice thing to have, and at times a selling point for customers who want a "hardware" firewall.

But it seems that having a centralised firewall for your "entire" network is infeasible. I'm wondering, then, how larger ISPs can offer hardware firewall solutions to customers with dedicated servers, when they have hundreds or even thousands of hosts?

Can anyone think of a way of solving this issue? Either something I've missed entirely, or a variation on one of the ideas above?

Based on @Ron's suggestion, I stumbled on this article which explains pretty well the issue I'm facing, and a good way to solve the problem.

Unless there's other suggestions, I would say this now is a product recommendation type of problem, so I suppose that's the end of it.

I'd pick one of two choices:

What core switches are you running? Policies are usually done at the distribution layer, if you are going with a collapsed Core design, then the core should be able to handle your requirements. Also, are you liking for statefull inspection or just acls. If you have any compliance you need to follow, acls may not be enough.

Personally, I would go with a firewall, perhaps look for one that can be clustered so you can cluster each together and maintain centrally managed rule base, such as a sourcefire firewall.

Not the answer you're looking for? Browse other questions tagged routing firewall design or ask your own question.

4
Defining the traffic-direction in stateful firewalls
6
VRFs to address asymmetric routing with stateful inspection
4
Layer 2 vs Layer 3 core - with HP IRF
0
Symptoms of an overworked firewall?
1
How to fix this messed up routing scenario with two IP's from same subnet on distinct WAN's?
4
Layer 3 Switch Routing vs Router on a Stick
3
Need some advice with network topology
3
L3 Core to Firewall question
1
Firewall on a stick for Intranet and static routing
0
Best ports to use for proprietary protocols that might get inspected/blocked by firewalls