I have been learning ICND1 through CBTNuggets.com course online, I have recently started a video where the instructor is guiding on how to use Wireshark to trace the communication.

He first used DNS to show how User Datagram Protocol is shown in the Wireshark when i do nslookup of any website.

then he started the Wire Shark Capture and visited a website CBTNuggets.com and suddenly his Wireshark window started to show protocols like TCP, HTTP etc.

But when I tried the same process, and visited google.com or any other website while my Wireshark capture is on, All i could see is SSDP protocol in my wireshark window.

I know the difference between UDP and TCP, and that TCP is a reliable communication and HTTP is TCP based protocol.

But why my Wireshark is not showing any TCP protocol when I visit any website ?

P.S: I am use Wireless Network Device 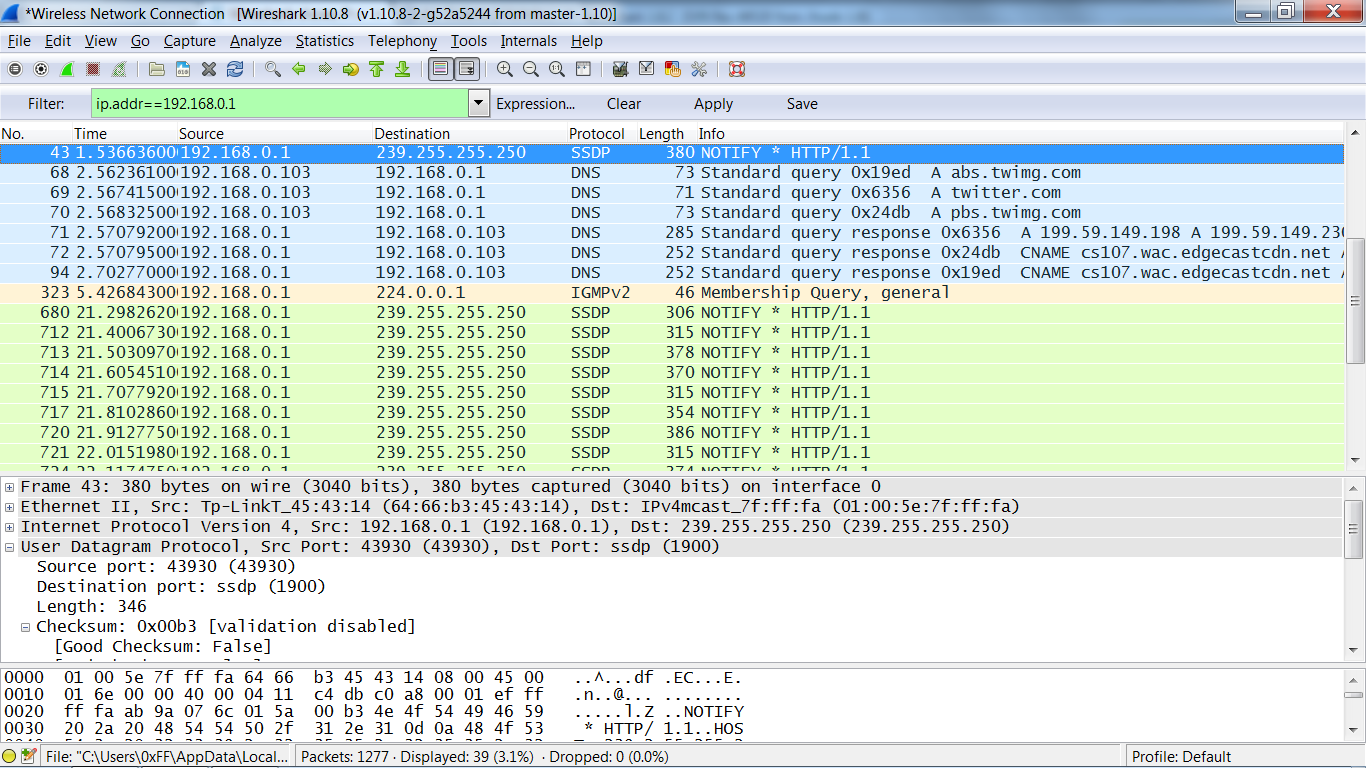 Clear the expression ip.addr==192.168.0.1 filter. This is probably whats filtering out what you want to see. You can tell by the very first column in WireShark, Look at the No. jumps at DNS No.94 to SSDP No. 680 --- So about 500 entries you arent seeing. You can also turn off the ssdp discovery service in windows to eliminate that ssdp mess.

SSDP is the Simple Service Discovery Protocol. As that Wikipedia article says, it is "a text-based protocol based on HTTPU" and "uses the User Datagram Protocol (UDP) as the underlying transport protocol."

So, yes, it's an HTTP-based protocol, and, yes, it runs atop UDP rather than TCP.

But it's not what's used for normal Web site access. That traffic will be shown by Wireshark as "HTTP", not "SSDP", and will run over TCP, if it's not "secure HTTP" ("https") traffic. If it's "secure HTTP", it'll show as "SSL" (Secure Sockets Layer, although the current versions of that protocol are called Transport Layer Security, or TLS), and won't show up as HTTP unless Wireshark can decrypt it.

Your initial capture clearly shows that your device is looking for a DNS server as it needs to translate as to what is the IP address of "twitter.com".

Once your machine couldn't find a DNS server, it goes on to search for devices that offer DNS services thus SSDP was triggered. SSDP is expertly defined by user2373 above.

Therefore, the reason why you cannot see any TCP or HTTP packets is because your filter captures your machine looking for a DNS service.

3
Determine protocol decode for non-standard ports in Wireshark
2
Number of TCP segments for HTTP response - Wireshark
0
HTTP server responds with TTL- exceeded for TCP-SYN till TTL is increased by +2 from the actual number of hops
1
Wireshark shows wrong protocol
1
Why is my pc not forwarding packets to my default gateway?
0
TCP Window Scaling on Wireshark