VLAN with Mixture of Managed/Unmanaged Switches

I've got a setup in my house as a test to try and figure this stuff out, but i've hit a bit of an end point. Here is a picture of my network setup. 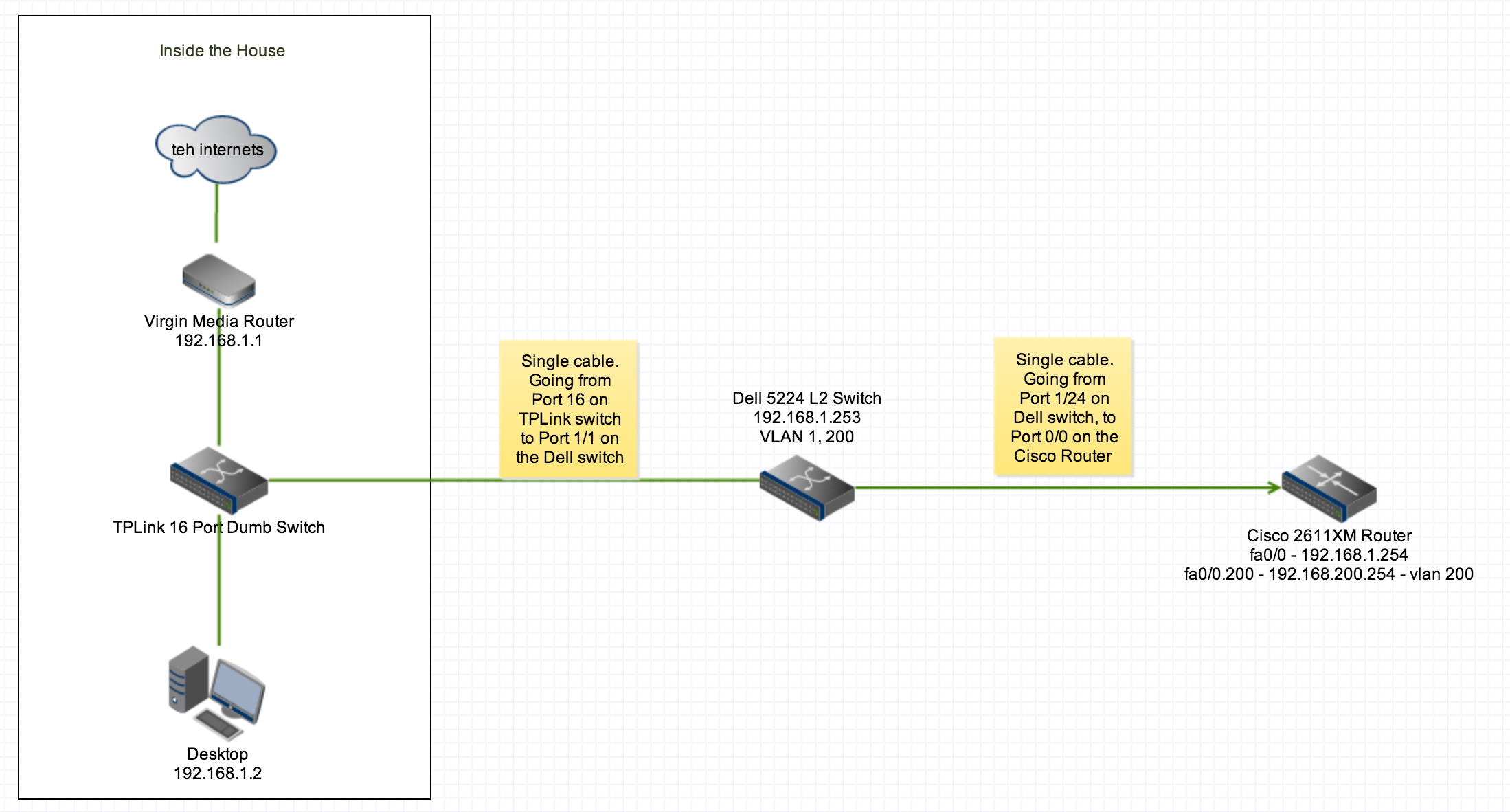 So i have my internet provided by Virgin Media, which comes through into a 16 port unmanaged switch, our of that into a Desktop PC which uses DHCP to pick up an address from the Virgin router. I also have another cable going down to the garage which has a managed Dell Switch and a managed Cisco router.

The problem then starts if i want to have a machine on the 200 VLAN. So, i change my IP Config of the Desktop to...

I now can't ping a thing, getting destination host unreachable across the board. So that leads me to think it isn't working!

Here are the configs for the Switch and the Router.

I think i've covered everything here...

Looking at the layer 2 topology, your PC is connected to a dumb switch which is hooked into a vlan 1 port on the managed switch. Because of this, regardless of what your IP address is the traffic coming from your desktop is hitting the switch on vlan 1.

Going back to layer 3 a bit, your default gateway 192.168.200.254 isn't in vlan 1 it's in vlan 200 because it's assigned to a router sub-interface which is watching for traffic tagged vlan 200. Therefore the PC's default gateway is unreachable at layer 2 and you get the infamous "Destination host unreachable" error.

On a related note, if you want traffic from vlan 200 to reach the outside internet you will need to create static routes on both the virgin media router and the Cisco router telling them about the other networks.

If the Dell switch's default gateway isn't the Cisco router, it won't know how to contact hosts in the 192.168.200.0/24 subnet because it has no return path. It will be able to respond to ping requests coming from hosts in it's own subnet (1921.168.1.x/24) becasue it is directly attached to that network, but it won't know a route to 192.168.200.x/24 unless it default gateway has a route to that network or it has an interface in that network already.

Not the answer you're looking for? Browse other questions tagged cisco vlan subnet dell or ask your own question.