I'm not a network guy, but a system administrator by background. I find myself, now, the sole IT guy at a growing business.

(This turned into a long explanation to setup the question, which is at the bottom of the post.)

I have four hosts in a colocation rack, two Synology NAS devices.

We talk to the hosts via a PAN firewall/VPN, which fronts a juniper switch, using http, https, RDP, SSL.

When the plan for deployment was written, by a now-departed admin, we ran up a proof of concept using Debian and ...

The 10gb NICs were VLAN/Internal, reserved for internal use only: between the guest VMs, and to the NAS devices. The IPs here were assigned to 10.10.1.x block.

The 3 1gb NICs were teamed in VLAN/External, and were used exclusively for internet traffic. The hosts on this network were assigned IPs in our public /26 block.

Since then we've scaled back the number of hypervisors, switched from Debian to Server 2012 R2, added the PAN firewall/VPN.

I'm not sure the VLAN idea makes any sense, if it ever did. We've added the Firewall at the top of the rack, and we can now NAT the traffic.

And every time I describe this setup to network pros, they sort of look funny, like it's all needlessly complicated. I'd like to simplify this, if possible.

My idea is to give all hosts IPs in the same subnet, using a single VLAN. My sticky point is this;

I'd like to continue to have each hypervisor (and each guest vm) use the 10gb NIC to talk amongst themselves, and to the NAS devices, while sending 'external' traffic (web, RDP) on the 1gb nics.

This will let us do the data crunching and file writing as quickly as possible, which is the whole reason for the exercise.

How do I do that? Use routing on the hypervisor?

By request: from my whiteboard, to tiff. 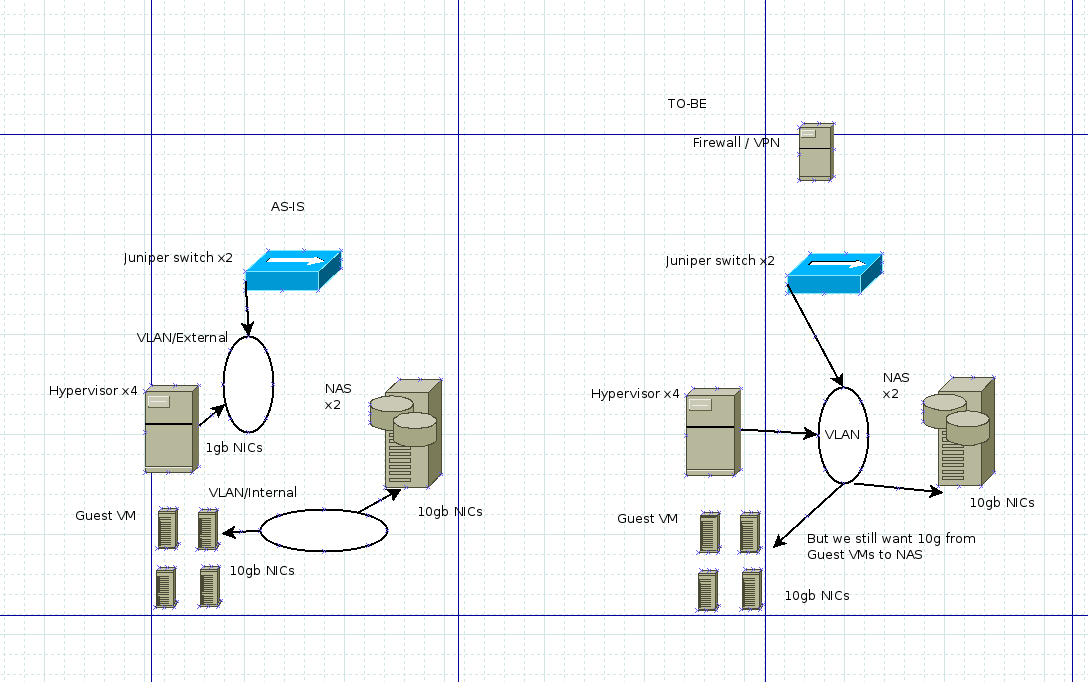 I think 2 private networks is the right way to do this. The second network is just like what everyone calls a SAN except it's ethernet with iSCSI, etc. instead of FC.

Your firewall has a public IP and a private IP (10.10.0.1/24). It uses SNAT to translate private machines to the internet public IP.

The hypervisor and storage servers have a separate dedicated storage/migration subnet also (10.100.0.0/24), which is not routed, NATted or bridged to the first subnet, and has no static routes, or gateway (and probably no dns, dhcp, etc.). One reason it is nice to have this separate is so you can raise the MTU without worrying about hardware support of some random desktop machines, etc. which don't support 9000 MTU.

To separate them, you can use VLANs (to share switches or other hardware), or different hardware (but the separate hardware should also have some admin access, perhaps join it into the other stuff with a simple VLAN; don't bridge them). And even if they are separate, don't necessarily assume that security is irrelevant; someone can still plug in a device to the network.

First, I highly recommend you check out this book on Hyper-V. Specifically you will want to read the chapter on Networking, subsection Advanced Networking.

Second, you definitely want VLANs to split out traffic types. It is unfortunate that you're stuck with 1 10GbE adapter that you wish to share with SAN, management and VM traffic. The method I would look at would be this:

On each host you would add a VM switch to the 10GbE adapter. Then you would add Management OS VM net adapters (Hyper-V terms) to this switch. One for actual management and one for iSCSI (and a third for failover cluster communication if you're using FC). You will configure each adapter to its own specific vlan and assign appropriate IPs.

Then you would create a network team in Server 2012 for your 3 1GbE ports. You will want to use LACP with HyperVPort load balancing. After this you build a second VM switch using this network team for the VMs external traffic.

For each virtual NIC on the hosts, you will want to add some sort of QoS to make sure the SAN traffic has priority on the 10GbE link.

Lastly, this has more to do with best practices for your virtualization environment and you may wish to move this to Server Fault.