What happens to this packet? (routed to machine on local network)

I'm having an issue with my network design. My goal is to have two networks behind a gateway device. "Circle1" would contain my internet facing proxy servers and "Circle2" would contain any number of app servers. "Cirle1" should connect to "Circle2" directly. This works great in most cases. I am however running into an issue where any packets originating from "Circle2" with a destination of the PUBLIC interface of a machine on "Circle1" seem to fall off somewhere.

The frusterating thing is that my packet captures of all points show the packet at the very least leaving the gateway server bound for 172.16.0.100 but do not show any packets coming into that server they didn't show up in stdout when running tcpdump but they do show up when looking at the dump after using wireshark.

Is this the result of my network architecture or configuration issue? Are packets not permitted to enter an interface for a machine for which the machine already has a different interface listening on that source network? 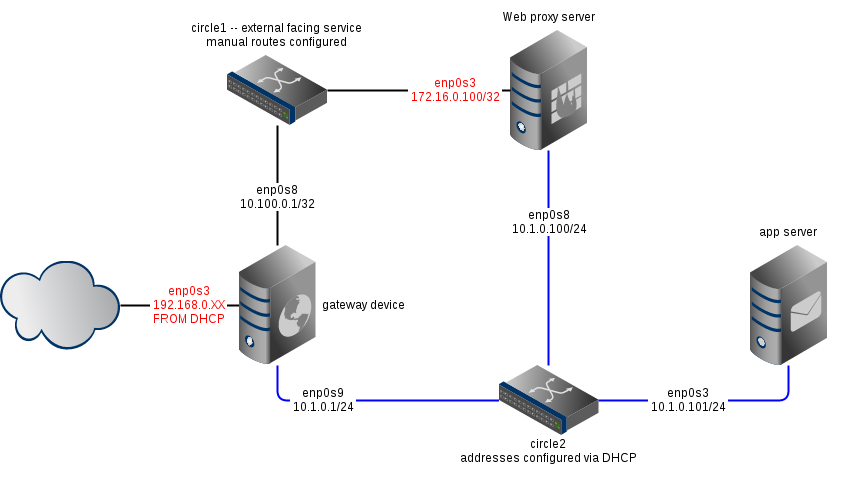 Note: the red addresses should would be replaced with public facing ip addresses in a non-lab environment

Thanks to those of you who've taken the time to try and help me. I do apologize about the rather verbose format.

more testing due to confusion caused by tcpdump

tcpdump -w cap does show all of the packets I'm expecting while tcpdump does not show any via stdout. It does however show a large number of packets dropped by kernel. This occurs regardless of run time or use of -B 4096 to expand the tcpdump buffer. It seems pretty obvious that the OS is rejecting the packets but I'm not sure why. (tcpdump hangs briefly when closing after piping to stdout but I'm not sure if that is related)

It turns out Red Hat 6+ will filter asymmetrically routed packets by default.

The solution is to To make this behaviour persistent across reboots, modify /etc/sysctl.conf and make the following change prior to reboot:

4
Path MTU discovery and retransmission
5
Sonicwall NSA 2600 routing issues with multiple LAN interfaces configured
3
Gateway interface latency is very high, while latency of traffic traversing gateway is very low?
0
Permanent will not add static default route
2
Weird networking behavior with a gateway between a switch and CMC module, on Dell VRTX equipment. Am I doing something wrong?
0
Connectivity from DHCP-based machines to servers with static IP addresses on the same gateway
0
How does packet traversal works over a public network with NAT overloading
0
What happens if the localhost does not interpret 127.0.0.1 as the loopback address?