Initially, I thought that the reason token ring uses a physical star topology is to make up for the shortcomings of a physical ring. That is: In a ring, when a failure occurs at any point, the system goes down.

However, I have read the following about daisy chains in Wikipedia (emphasis by me):

By connecting the computers at each end, a ring topology can be formed. An advantage of the ring is that the number of transmitters and receivers can be cut in half, since a message will eventually loop all of the way around. When a node sends a message, the message is processed by each computer in the ring. If the ring breaks at a particular link then the transmission can be sent via the reverse path thereby ensuring that all nodes are always connected in the case of a single failure.

So it says that a message can be transmitted in both directions, which ensures the system not to go down in case of a failure at a point.

So is there an error in this Wikipedia article or am I missing something?

Token ring may appear to be a physical star, but it really is a ring from the perspective of the cabling. A physical token ring cable has an outbound cable, and an inbound cable inside it. Breaking one of those internal cables will break the ring, and the MAU will bypass the cable, thus preserving the ring.

The token ring star can be thought of as a circle (ring) with various points pushed tightly toward the center of the circle. It is still a physical ring, just distorted: 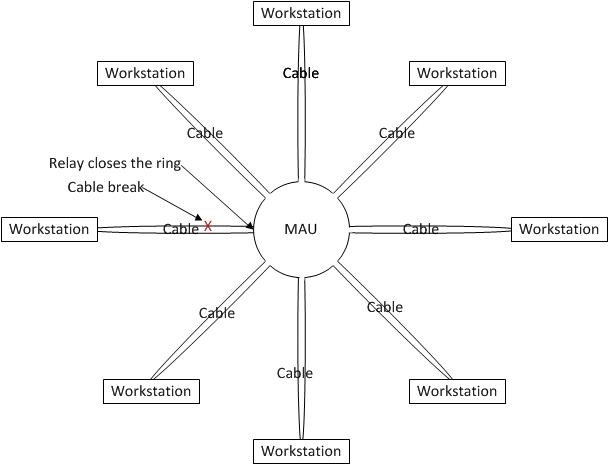 Not the answer you're looking for? Browse other questions tagged cabling layer2 layer1 or ask your own question.

6
How does priority work in token ring?
2
Why does a copper cable with higher frequency signals attract more attenuation?
1
Token ring topology and token passing concepts
1
Why exactly is soldering discouraged in UTP networks?
7
Why preamble is not considered a part of the Ethernet Header?
0
Cannot Ping Linux PC through L2 Switch
0
How southern cross cable can transmit IP/ Ethernet signals keeping in mind the physical limitation of Ethernet cables?
0
Uses of Rollover Cable
0
Is SONET a physical layer or a data link layer?