arp update not working as expected

I have a simple network setup as follows (both switches are layer 3, and switch 1 is also a router to reach outside network): 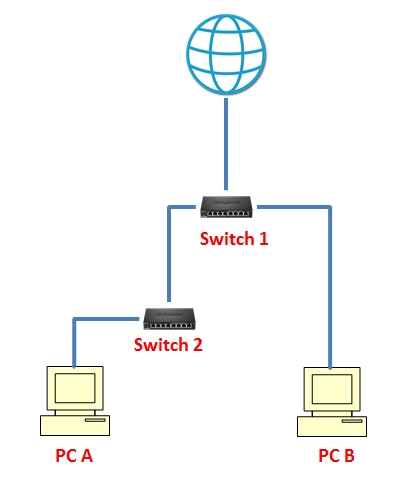 I need to move an IP address from PC A to PC B (following a PC failure). The network above is attached to eth1 on both PC's. (eth0 is connected to an unrelated network).

After failover, I issue this command from PC B:

As you can see no responses are received. If I issue ifconfig on PC B I can confirm the NIC is up and running:

A switch will update its MAC address table from any frame it receives on a port. Switches aren't interested in IP, or any other layer-3, addresses, only layer-2 (MAC) addresses. ARP is a host protocol to resolve a layer-3 address to a layer-2 address.

Since the layer-2 addresses of the PCs aren't changing, the switches are unaffected by the change in IP address.

You can clear the ARP cache on the router. It will eventually time out anyway, probably during the time it takes you to notice that PC A is down and move the IP address to PC B.

You are trying to arping you own address, and you don't get a reply. If you arping the gateway address, you should get a reply.

Just as if it was a separate router, the router of the layer-3 switch maintains an ARP cache for a connection to a layer-2 network, but it only knows which layer-3 interface to which it should send traffic, not which particular layer-2 port to which an individual host is connected.

The layer-2 part of the switch is the part concerned with the physical switch port to which PC B is connected, and it only cares about PC B's MAC address, which I doubt you changed when changing its IP address.

The router's ARP cache is only concerned with which MAC address should be related to the IP address, not the physical switch port to which PC A or B is connected. The ARP cache entry may be stale, but not for long, and probably not at all.

In short, there is nothing you need to do to the switches when PC A is disabled, and you assign the address from PC A to PC B.

Not the answer you're looking for? Browse other questions tagged switch arp or ask your own question.