Can a single-mode single optical fiber support full-duplex communication, or does it have to be two fibers, one for each direction?

Yes. There are "BX" standards, e.g. 100BASE-BX, which use different wavelengths for send and receive. The transmit wavelength on one end needs to be the receive wavelength on the other end.

For example, Cisco has these transceivers:

A 1000BASE-BX10-D device is always connected to a 1000BASE-BX10-U device with a single strand of standard SMF with an operating transmission range up to 10 km.

The communication over a single strand of fiber is achieved by separating the transmission wavelength of the two devices as depicted in Figure 2: 1000BASE-BX10-D transmits a 1490-nm channel and receives a 1310-nm signal, whereas 1000BASE-BX10-U transmits at a 1310-nm wavelength and receives a 1490-nm signal. As shown, the presence of a wavelength-division multiplexing (WDM) splitter integrated into the SFP to split the 1310-nm and 1490-nm light paths.

Figure 4. Bidirectional Transmission of a Single Strand of SMF

A full duplex or Bidirection communication meaning that it can support both stations transmitting and receiving simultaneously.

To accomplish this, a single optical fiber with WDM technology is required for optical tommunication.

WDM stands for wavelength division multiplex. This multiplex method uses both 1310 nm and 1550 nm wavelengths.Two devices are used for connection via a single optical fiber just as seen in the picture. Device A transmits data at 1310 nm on the TX channel and device B receives data at the same wavelength on the RX channel. When the roles are reversed, 1550 nm is used in the other direction. Connection is therefore only possible between device A and device B. The devices are available as a set. 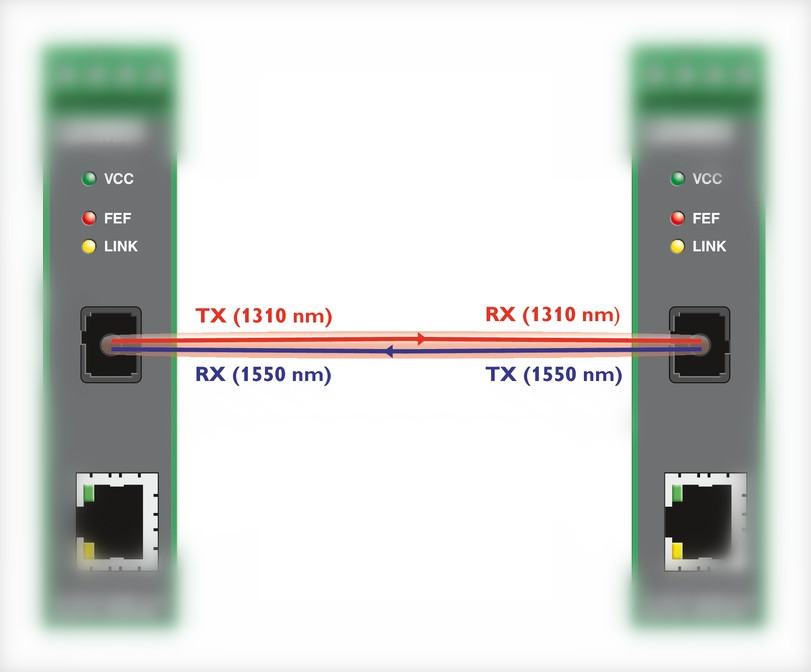 Yes, if you have the right hardware.

Normally a seperate strand of fiber is used for each direction. This keeps the transcievers simple and allows the same transcievers to be used for both ends of the connection.

Single strand fiber transmission use a single strand of glass (optical fiber) to send data in both directions, namely bidirectional (BiDi) transmission. In recent years, the mainstream single strand fiber transmission technology is based on two wavelengths traveling in opposite directions (also called TW BiDi transmission). This technology is achieved via wavelength division multiplexing (WDM) couplers, also known as diplexers, which combine and separate data transmitted over a single fiber based on the wavelengths of the light. Generally, this WDM coupler is integrated into a standard interface optical transceiver module. You can read more details here: http://www.fs.com/blog/single-strand-fiber-solution-is-it-right-for-you.html

There are 45 common channels for DWDM, 18 for CWDM - these overlap but you can easily run a dozen full-duplex links over a single fiber using readily available transceivers and multiplexers.