I have a CGR1240 Router in Cisco Packet Tracer: 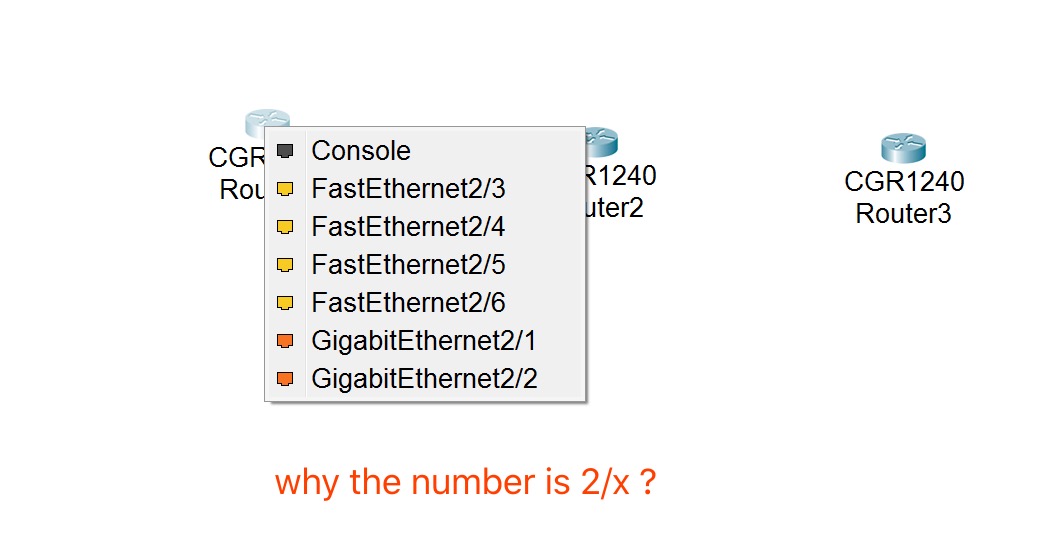 I have a question about the name of port.

I have no idea about the name number of a router/switch port.

why there is 2/* in CGR Router? such as FastEthernet2/3, GigabitEthernet2/1? and in somewhere I also see the FastEthernet0/0/1, there is three number.

is there any rule of the Router/Switch port name?

Cisco usually names their interfaces following the (internal) structure of the given device.

Generally, this follows the syntax

So that makes FastEthernet2/0

They had (E)HWIC and NEM slots, and if you inserted e.g. a 2-port FastEthernet card, or a 2port serial card in Slot 2, these would become

Now if your device happens to be of particular internal topology, it might very well be that all your ports reside on "Module 2".

Stackable/multichassis switches such as the 2960-S and X, or the 3750 series (and their younger siblings 3650 and 3850), and the VSS capable switches as well (6500 series, 4500-X), have three segments, where the first number represents the chassis, the second the module, and the third the Port. some models have modules/slots for additional ports, such as a 4x10G Module in the Cat3750/3850.

And then, some of the more sophisticated routers follow the <slot>/<subslot>/<port> scheme, for example: https://www.cisco.com/c/en/us/td/docs/interfaces_modules/shared_port_adapters/install_upgrade/ASR1000/asr_sip_spa_hw/ASRintro.html

This is all rather superficial - I think one could write books about Cisco interface numbering :-), and we haven't even come to the carrier grade devices yet.

[1] unless of course, you are on a Nexus platform, where a switchport of any speed (from 1G to 100G) is called ethernetX/Y

Not the answer you're looking for? Browse other questions tagged cisco switch router or ask your own question.

6
Does EIGRP use AS number/process number as it's PORT NUMBER between routers in the same AS/group?
1
ASA/Router/Switch NAT for DMZ
3
Cisco Router with Dell Switch VLAN Configuration
1
What protocol forces a switch to populate it's CAM table with the MAC address of a directly connected switchport?
0
Cisco Router and TP-LINK Switch
2
Can not create sub-interface like `interface gigabitEthernet 2/1.100`
1
Is there any router port module of the Cisco Packet Tracer Router?
4
Whether the Vlan10 and Vlan20 in the Center Router are two virtual router interfaces?
2
What's the difference between Serial DCE and Serial DTE link?
3
Why the network switch drop the frame acording to ethertype/length?