What is the purpose of a switch routed port?

From my Cisco CCNA documentation: 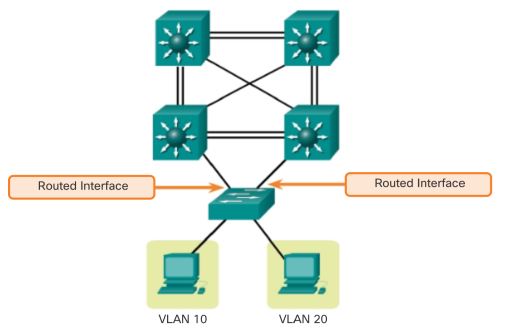 I don't understand what are the benefit of having a routed port between the distribution and access, and more generally, the purpose of routed ports except for inter-VLAN routing like with the router-on-a-stick method (and even there, it seems that SVI are a better approach).

Routed Interface means it is a Layer3 physical Ports which is not supported to Layer 2 communications such as STP.

All Ethernet ports are routed interfaces by default.(in router) You can change this default behavior with the CLI setup script or through the system default switchport command.

Routed ports are supported to all routing protocols.

But don't misunderstand, SVI and routed interface. SVI is a virtual or logical interface which assigned to one VLAN. But Routed port is a Physical interface.

Not the answer you're looking for? Browse other questions tagged cisco router interface or ask your own question.

1
ignore/block upstream DHCP, instead use switch DHCP?
2
Is it possible to replicate RSPAN features without trunk ports?
1
Setting system jumbomtu on Cat 6500
1
HSRP - 2 separate Virtual Router for Distribution and WAN?
2
How does ARP work on multilayer (Cisco) switches
0
Regarding Cisco's hierarchical network design
0
Unable to ping between router and routed port on L3 switch. Why?
0
Duplicated Vlan ID
2
Difference between SVI and subinterface