How the two computers are able to ping themselves which are connected to single router but both are in different Network? 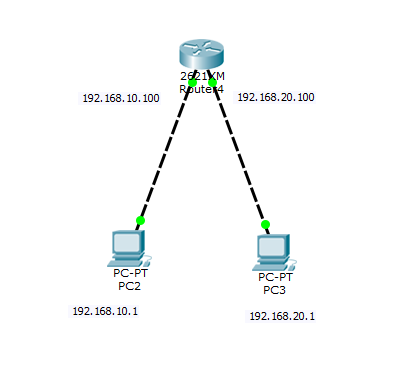 I have configured network as shown in figure. as we know that we can't ping computer which is in the other Network without routing protocol.

That is incorrect. Routing protocols are one of three ways routers populate their routing tables:

Routing protocols are used to exchange routes between routers, but they do not route the packets.

then how I suppose to ping this computer as shown in figure without applying routing protocol.

That's what routers do. Your router inherently knows about both networks because they are directly connected, so it will populate its routing table with both networks, and it will default to routing packets between the networks.

As per your diagram both PC2 & PC3 should able to ping each other beacuse both networks are directly connected networks. No extra routing is required on router .

When PC2 wants to ping PC3 . Traffic reaches to router from router

Router will process this packet towards destionation by verifying ARP table in router .

Not the answer you're looking for? Browse other questions tagged routing router lan ping or ask your own question.

6
NEWBIE: How can two computers communicate if they are behind firewalls?
2
Can PC2 on subnet mask /23 send a ping to PC1 (both connected on different router ports/networks)
2
How a ping from DLCI 102 going to DLCI 301 instead of 201?
4
How can 2 computers in different network communicate?
5
Can a network with a default gateway successfully ping a PC in another network without gateway?
1
EIGRP Routing Issues
1
Deny ping between two PCs on same LAN
9
Different Behaviour of a Router